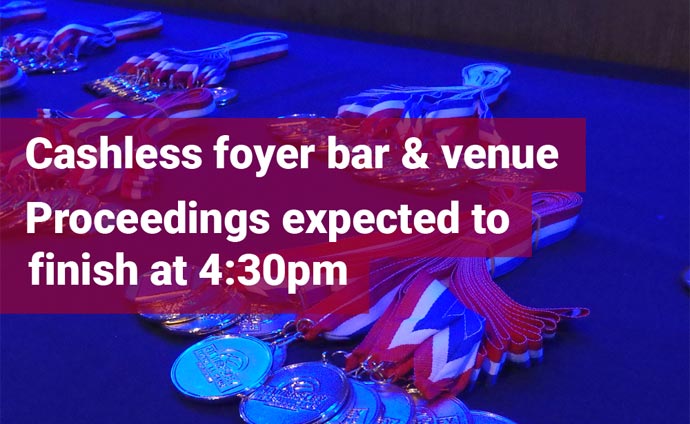 Not long to go now, here's a few of things to make note of before our big event: Looking forward to seeing everyone on Sunday!
Posted: 16 October 2019 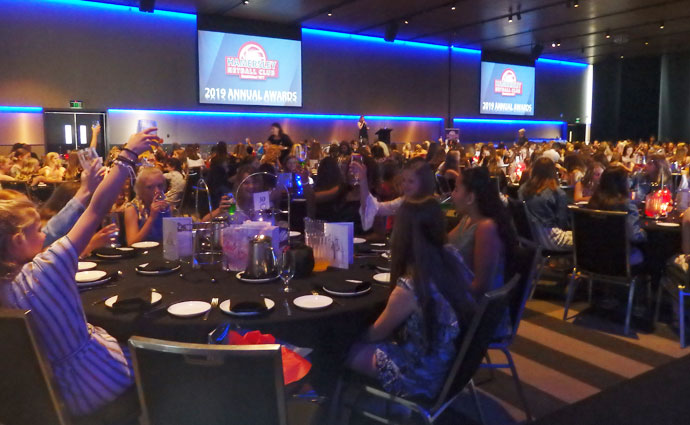 Do you know any members, ideally a parent or photography student, who might be interested in helping at our Annual Awards event on Sunday 17 October? We are looking for a volunteer to capture some informal snaps in the foyer along with some additional photos of award winners. Contact Aimee our Events Coordinator if you would like more information or wish to volunteer.
Posted: 3 October 2021 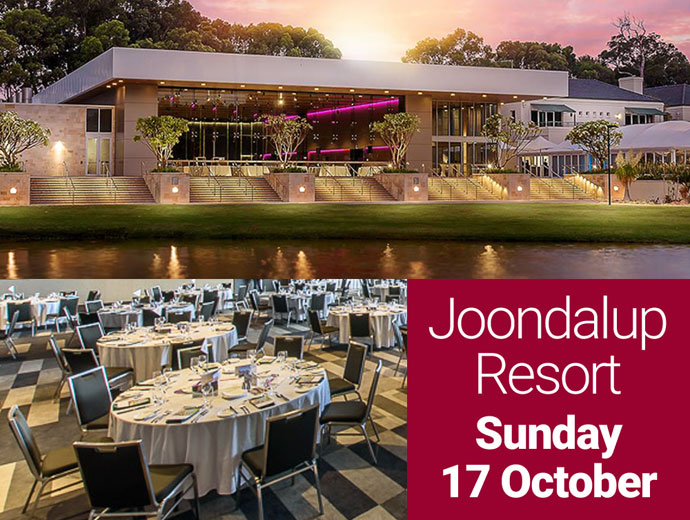 We are all looking forward to a bit of glitz and glamour this year as we return to the luxurious Joondalup Resort for our 2021 Annual Awards High Tea on Sunday 17 October. View directions here. Please arrive at 12:30pm for some fun in the foyer before the proceedings start. We are due to finish at 5:00pm. Remember there is a dress code: Cocktail attire, strictly no jeans or thongs ladies and gentlemen! The last time we held an event at the Joondalup Resort was in 2019, view the celebrations in our Gallery!
Posted: 29 September 2021

Registrations are now open for 17U & 19U West Australian State Teams. 19U Trial Date
Saturday 23 October. 17U Trial Date
Saturday 30 October and if required Sunday 31 October.
Netball WA's vision is to select the best emerging talent across the State to represent Western Australia at the National Netball Championships. The State Program is an integral step in the Netball WA Pathway and Netball WA are looking for athletes who are ready to embark on the journey and enjoy the challenge. Visit Netball WA's website for further information on the WA State Team Program. Registrations close Wednesday 13 October.
Posted: 24 September 2021
Registrations are now open for Term 4 of our 2021 Strength & Conditioning program. Watch Laurence's video to learn about how he works with youth athletes to strengthen and bullet proof them from injury for the long term. Head over to our Strength & Conditioning page to read more, or register directly via Warwick Workout. Term 4 commences the week beginning 11 October and registrations close 6 October. See you in the gym!
Posted: 23 September 2021 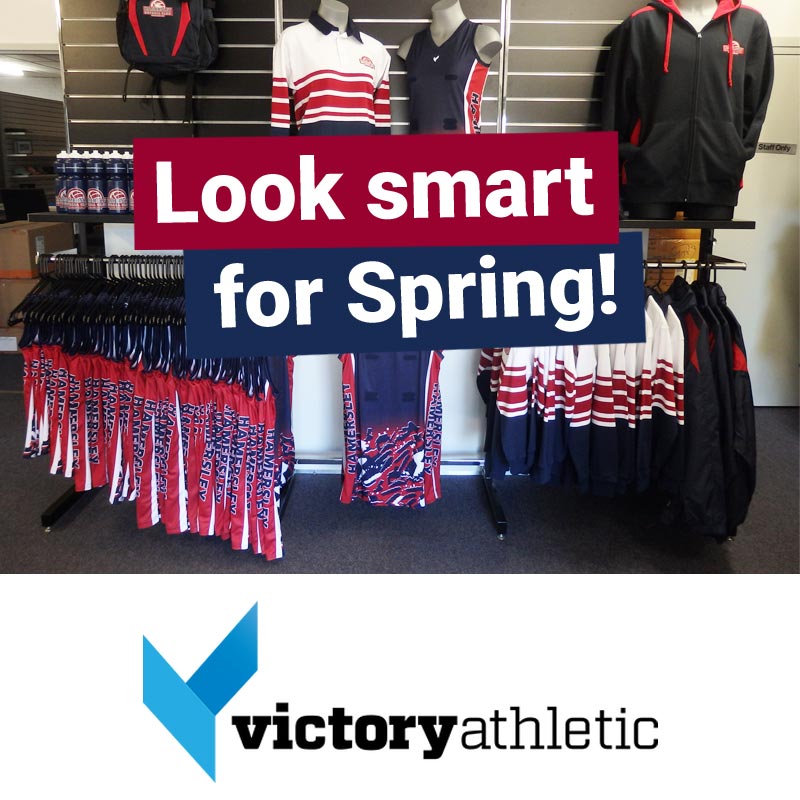 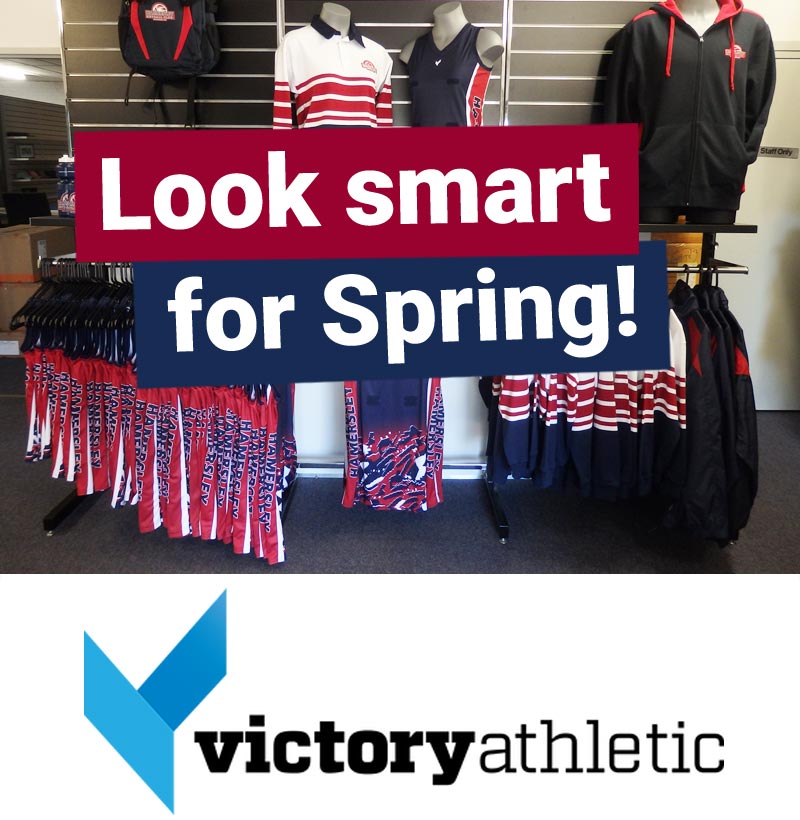 Need to grab a new uniform item for Spring Netball or perhaps do a spot of early Christmas shopping? Our uniform supplier Victory Athletic will be open in the school holidays on: Drop in to Unit 4/12 Mumford Place, Balcatta for purchases, try ons or to pick up an online order. Visit Victory's website for the full range including pricing and sizing or contact Katie Mitchinson on 0406 331 003 for more information.
Posted: 21 September 2021 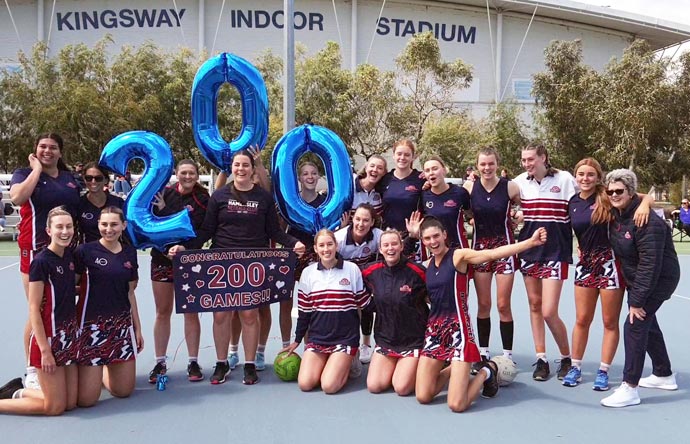 Congratulations to Amy Fuller on her 200th game for Hamersley Netball Club. Amy has been playing netball with our wonderful club for the last 15 years from a junior all the way through to being one of our most respected senior players. Amy is a true team player; positive, encouraging and supportive. When she steps on the court her energy and tenacity are unstoppable. Her grit and determination to have an impact on the game is on display for all to see. 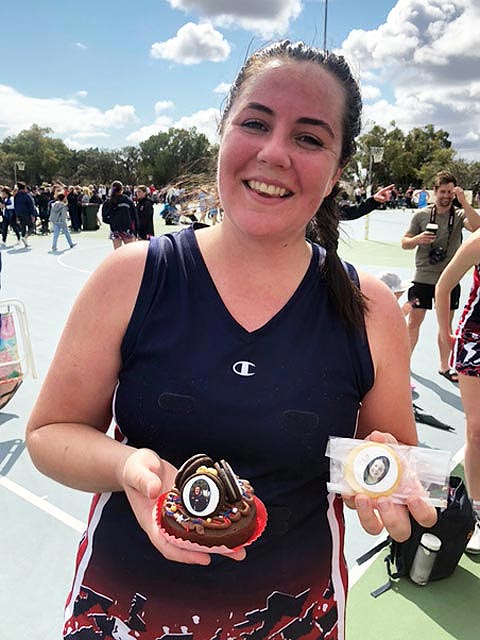 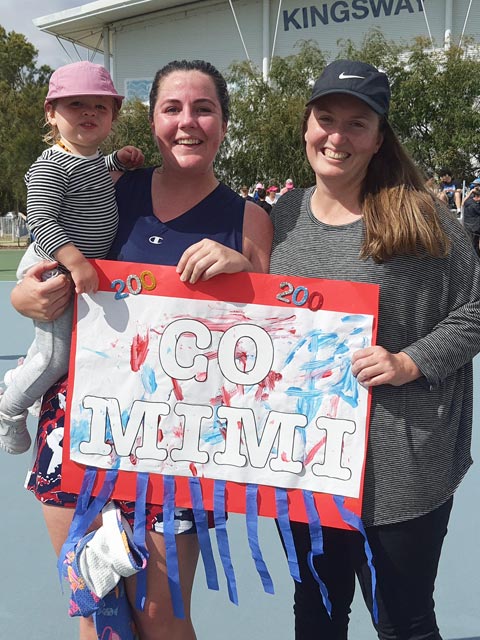 Amy you are a huge asset to Hamersley Netball Club. You are the epitome of the Club’s motto "be the best you can be" and all that have played with you over the years know that you’re always there encouraging others to be the best they can be. 200 games is something to be very proud of and celebrated. Congratulations on this milestone Amy.
Posted: 19 September 2021 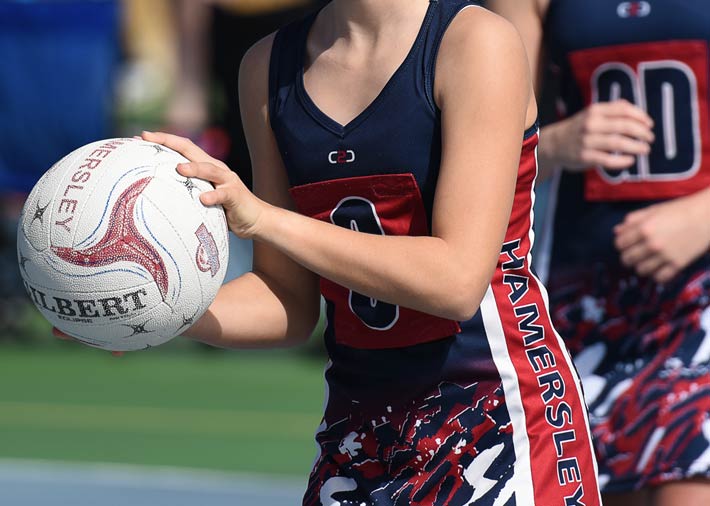 Congratulations to the 10 teams that have made the Grand Finals on Saturday 18 September. Also a huge well done to those teams who didn't make the Grand Final but represented our club wonderfully throughout the season. We would love to see everyone at the courts on Saturday showing support and cheering our girls to victory! 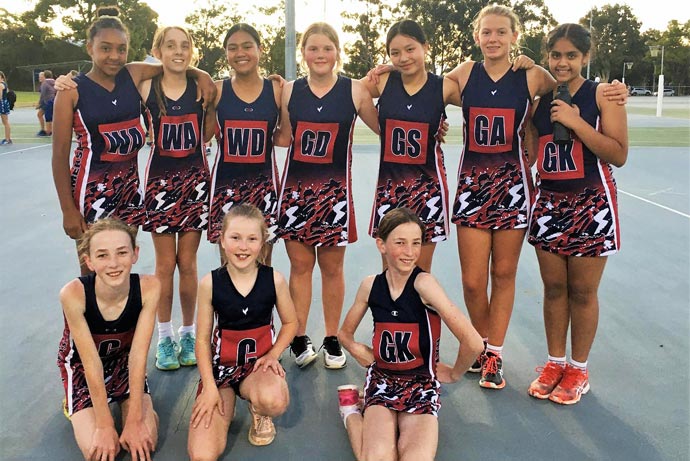 Any teams wishing to participate in WDNA 2021 Spring Netball Competition must forward their completed Team Nomination excel document to the Hamersley Spring Coordinator by Thursday 16 September. For full details on Spring, how to nominate and to download the nomination template, see the email forwarded by your 2021 Winter Team Manager.
Posted: 14 September 2021 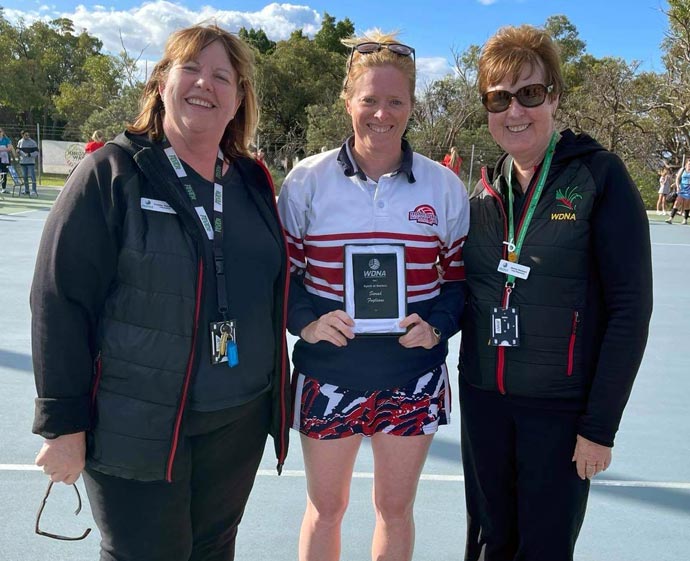 Congratulations to Sarah Fogilani on being awarded the 2021 WDNA Spirit Of Netball Award. Sarah received this award along with Miriam Ifold for the stella work they did setting up WDNA's inaugural Indigenous Round in recognition of National NAIDOC Week. Have a look at our 2021 Hamlet Issue 1 and read about the amazing activities Sarah and Miriam organised including a Welcome to Country with a Smoking Ceremony, painting activities and Indigenous match balls.
Posted: 14 September 2021 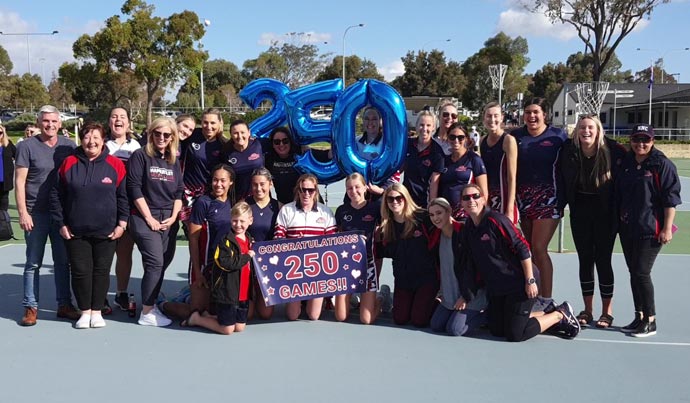 Congratulations to Michelle Cox for achieving her 250 Game milestone for Hamersley Netball Club. Hard work, commitment, loyalty, passion, determination – these are just some of the words that spring to mind when explaining what Mich brings to our club... and that is just as a player! Mich’s involvement with Hamersley spans an amazing 25 years and even though 7 of these were spent in the UK, Michelle remained in touch with the Club and kept her promise to return - although it was a little longer than expected! Along with her commitment as a player, Mich has coached for 11 seasons and has not only guided most teams to finals, but 8 of them have achieved a grand final appearance. 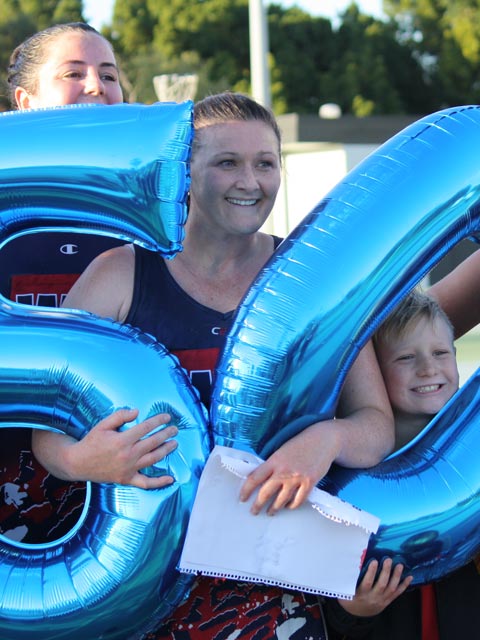 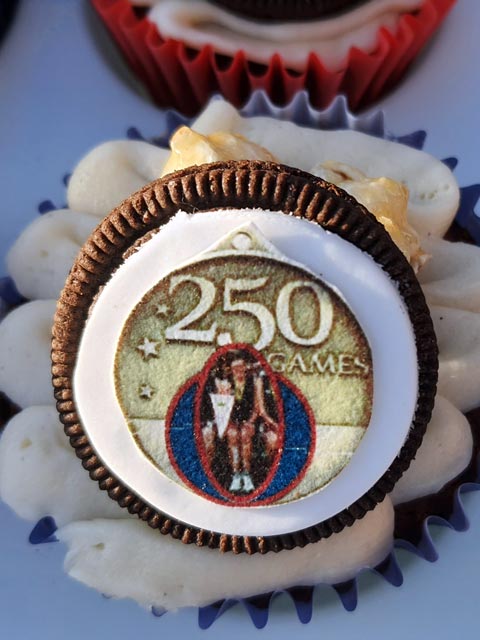 Anyone that has been lucky enough to play alongside or be coached by Mich have witnessed what dedication is all about. Mich has played an important part in developing many of our up and coming players and continues to be a wonderful role model both on and off the court. Thank you for all that you have done over the years. You are a true inspiration and we look forward to your continued involvement for many years to come.
Posted: 12 September 2021 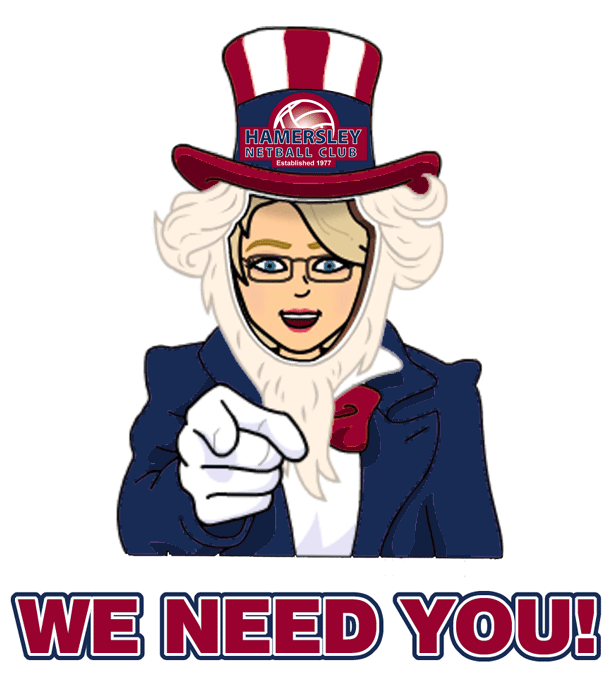 Sadly our Club Treasurer Heidi Leaver will not be available next year and we are now looking for a member to help with this role. Do you have: Heidi will be available to train and mentor for the rest of this season to ensure a seamless handover of the role. If you are interested or would like further information, please contact Heidi.
Posted: 6 September 2021 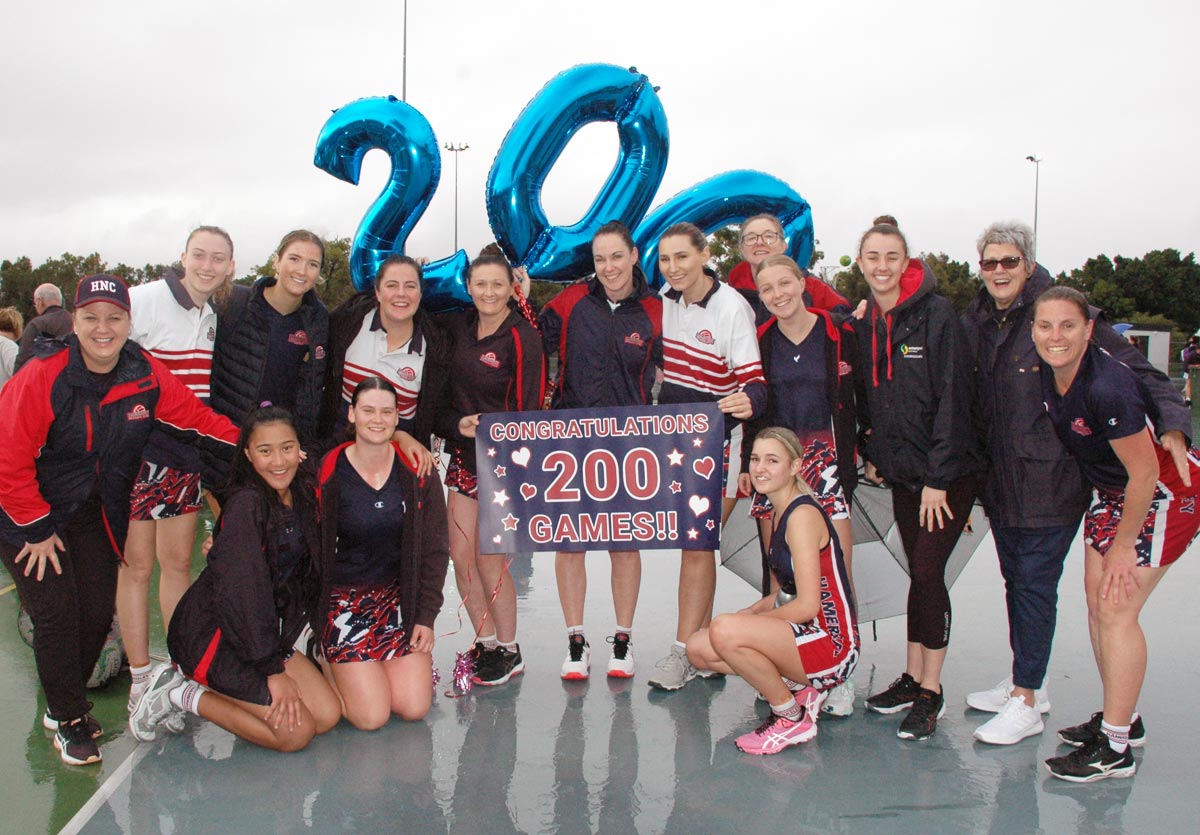 Congratulations to Sarah Campbell for achieving her 200 Game milestone for Hamersley Netball Club. Sarah has been an active member of our Club for 19 years. She gives 100% to every game and takes the hard knocks in her stride. Sarah’s trademark game is always played with a big smile on her face whether that be while taking a flying intercept or ending up on the ground every game. She is a dedicated team member who brings out the best in others. 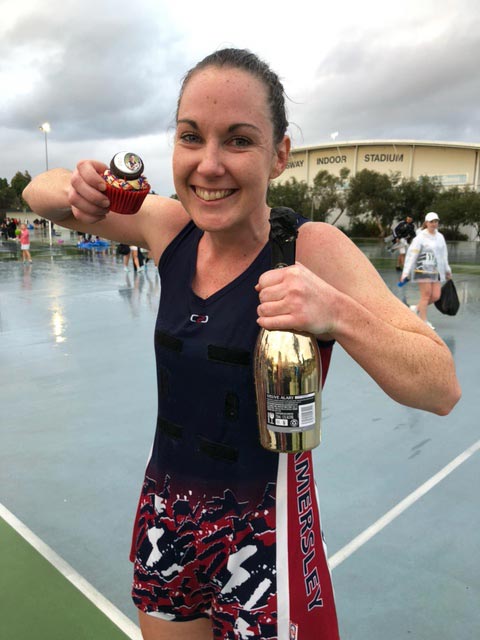 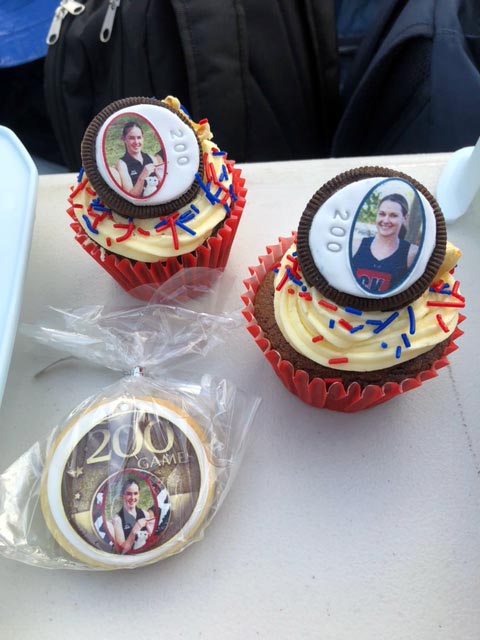 Sarah, you bring something special to the Club with your passion and loyalty. You are a true representation of what our Club is all about. Congratulations on your 200 Game milestone.
Posted: 22 August 2021 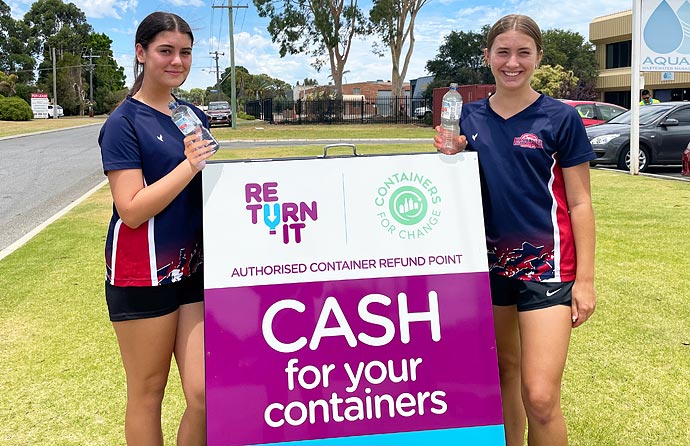